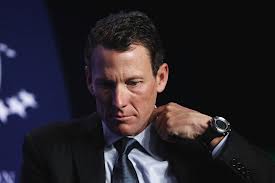 Lance Calls it No Contest.

By now you have heard that Lance Armstrong has decided to give up his decade-long fight to clear his name of using performance enhancing drugs while on his way to winning the world’s most popular bike race 7 times, the Tour de France.  Those titles, all seven of them, have been stripped from Lance Armstrong.  What most of us know (our strong opinion) by this surrender, is that Lance Armstrong is probably guilty of something.  If not, why would you stop fighting to clear your good name?  After all, Lance is the face of cancer recovery and has millions of fans that look up to him as a hero.

Lance’s decision got me to thinking about what one does if they are in a pursuit of greatness and are presented with a moral dilemma.  Let’s imagine that you become the top cyclist in the world but a year later you fall out of the Top 3.  You know for a fact that the 3 cyclists above you are all using illegal substances to boost their performance.  You decide you are going to compete drug free but a year later you find yourself in 6th place with the 5 above you all using drugs.  Not much time passes before you find a spot at 11th place in the world.  Of course the entire Top 10 is now using performance enhancing drugs and the sport you love is now one where you can no longer compete on a level playing field.

What do you do now?  Do you stay true to yourself, remain drug free and watch your ranking plummet into the triple digits?  Do you tell on your fellow cheating cyclists?  Or, do you cave in to the pressure and start taking drugs yourself?  After all, without the drugs, there is no way you can beat the cyclists above you that are doping.

This is a choice that many athletes have found themselves facing as they rise through their sports’ respective ranks.  The sprinter who holds all the records at high school goes to a top university only to find that his/her blazing speed is not so fast at this level.  They also quickly realize that some of the runners they are competing with are getting help from banned substances.  These drugs are giving them the edge that they need to get to the top-level of their sport where, of course, they will quit using once they are crowned a champion.

This year nearly 100 minor league baseball players have been busted with performance enhancing drugs in their system.  The reason that they risked getting busted is clear.  They wanted to get to “the show”, or what we commonly call the big leagues, and they were willing to do whatever it took to get the edge and stand out in the minors.  The thinking goes that once I make it to the “bigs” I can stop taking the drugs because I have arrived.  What they find is that they have to keep it going or they could get kicked right back down into the minors.  Their moral dilemma continues…

Lance Armstrong is putting up a good front right now.  His foundation donations are up and 100% of his sponsors have made the decision to stand by him even as he does something that few innocent men do.  Over time though more and more people will come to see what has happened here.  A man recovers from testicular cancer, a disease that should have killed him, and then decides to give up fighting for his innocence around doping.  I have heard that while Lance was at death’s door he was compelled to tell his doctors what he had put into his body so that they could save his life.  He confessed to being a bad boy in front of two friends, a married couple, who are lined up behind a dozen or so others to swear that Lance used banned substances during his career.

Why would this couple, former bike riding teammates (some who were busted for drugs and some not), and others from around the sport of cycling all line up to testify against him using drugs?  Probably because he is guilty of something.  Tests are one thing but when human beings, with no ax to grind, all start telling the same story about you it’s probably because it is true.  The way to avoid such embarrassing disclosures is to just shut the whole process down which is where we find ourselves right now.

Would Lance have all of the staunch support he now commands if he hadn’t rained in all those millions for cancer research?  Probably not and eventually the money train is going to slow down and when it does opinions of Lance’s guilt or innocence will start to color his legacy the right shade of gray.  So often the court of “public opinion” depends so much on the likability and the bankability of the subject in question.  Everyone loves Lance because of his cancer battle and are now more than willing to look the other way at the fact that he cheated his sport.  Those of us who are smart enough to realize the feeling of true innocence would never give that up unless we were guilty.

Posted by Lyn Medearis on August 27, 2012 in Business, Life, Sports